Home News Publication: Responses to startling acoustic stimuli indicate that movement‐related activation is constant prior to action: a replication with an alternate interpretation

Publication: Responses to startling acoustic stimuli indicate that movement‐related activation is constant prior to action: a replication with an alternate interpretation 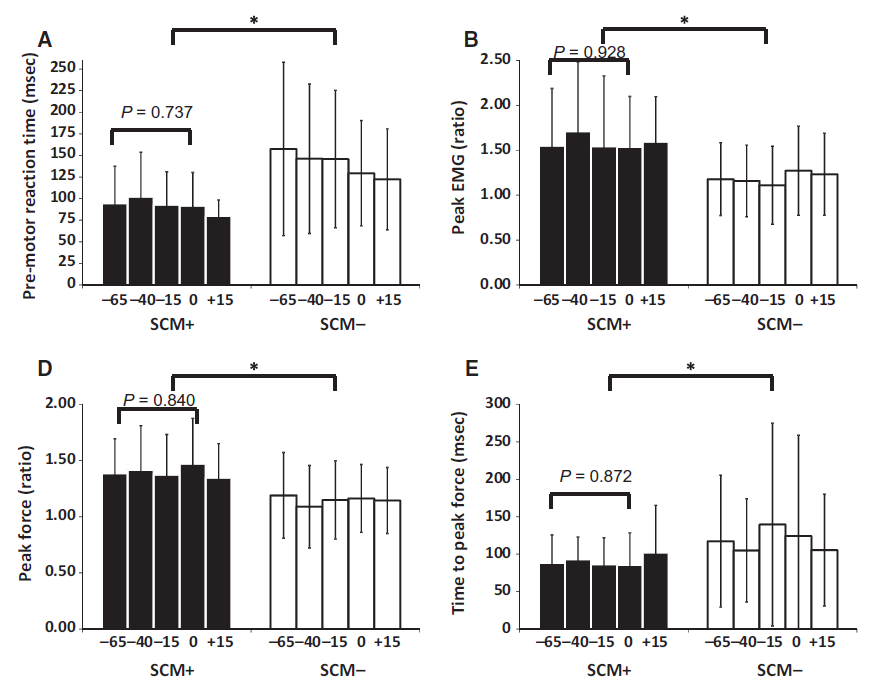 This study is a replication of a previous experiment that investigated how movement-related brain activation changes as a go-stimulus approaches in time. The previous experiment used a startle to show that activity increased in short time prior to the go-signal. However, startle activity was not reported, so this was only indirectly inferred. The replicated study separated trials where startle-related activity was or was not observed and found significant differences in most dependent measures based on the presence or absence of startle related activity in the sternocleidomastoid (SCM) muscle. Furthermore, this analysis changed the interpretation of the original results, indicating that movement related activity was in fact, constant prior to initiation of the action.

“A recent study by Marinovic et al. (J. Neurophysiol., 2013, 109: 996–1008) used a loud acoustic stimulus to probe motor preparation in a simple reaction time (RT) task. Based on decreasing RT latency and increases in motor output measures as the probe stimulus approached the “go” stimulus, the authors concluded that response‐related activation increased abruptly 65 ms prior to the imperative stimulus, a result in contrast to previous literature. However, this study did not measure reflexive startle activity in the sternocleidomastoid (SCM) muscle, which has been used to delineate between response triggering by a loud acoustic stimuli and effects of stimulus intensity and/or intersensory facilitation. Due to this methodological limitation, it was unclear if the data accurately represented movement‐related activation changes. In order to provide a measure as to whether response triggering occurred on each trial, the current experiment replicated the study by Marinovic et al., with the collection of muscle activation in the SCM. While the replication analyses involving all trials confirmed similar results to those reported by Marinovic et al., when data were limited to those in which startle‐related SCM activation occurred, the results indicated that movement‐related activation is constant in the 65 ms prior to action initiation. The difference between analyses suggests that when SCM activation is not considered, results may be confounded by trials in which the probe stimulus does not trigger the prepared response. Furthermore, these results provide additional confirmation that reflexive startle activation in the SCM is a robust indicator of response triggering by a loud acoustic stimulus.”