Publication: Neural processes mediating the preparation and release of focal motor output are suppressed or absent during imagined movement 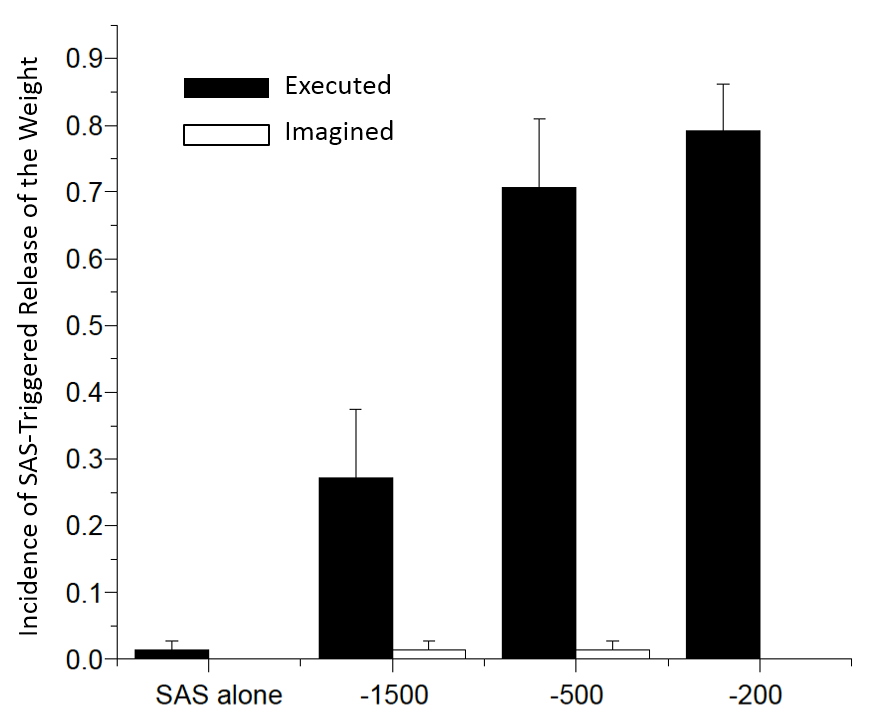 This study investigated whether movements that were “imaged” or “imagined” to be executed involved a build up of preparatory activation in brain structures in a similar way as movements that were actually executed. By using a loud startling acoustic stimulus, we are able to elicit pre-planned movements if they have been sufficiently “prepared” in advance (for example imagine a sprinter getting ready to react to the starting pistol).  The results of this study showed that although there was some brain activity that indicated some planning was occurring for imagined movements, the startle was unable to elicit the imagined movement, suggesting it is not planned to the same extent as “real” actions. An unexpected finding was that the postural component of the action was reliabley elicited by startle durig the imagined condition.

“Movements that are executed or imagined activate a similar subset of cortical regions, but the extent to which this activity represents functionally equivalent neural processes is unclear. During preparation for an executed movement, presentation of a startling acoustic stimulus (SAS) evokes a premature release of the planned movement with the spatial and temporal features of the tasks essentially intact. If imagined movement incorporates the same preparatory processes as executed movement, then a SAS should release the planned movement during preparation. This hypothesis was tested using an instructed-delay cueing paradigm during which subjects were required to rapidly release a handheld weight while maintaining the posture of the arm or to perform first-person imagery of the same task while holding the weight. In a subset of trials, a SAS was presented at 1500, 500, or 200 ms prior to the release cue. Task-appropriate preparation during executed and imagined movements was confirmed by electroencephalographic recording of a contingent negative variation waveform. During preparation for executed  movement,  a  SAS often resulted in premature release of the weight with the probability of release progressively increasing from 24 % at −1500 ms to 80 % at −200 ms. In contrast, the SAS rarely (<2 % of trials) triggered a release of the weight during imagined movement. However, the SAS frequently evoked the planned postural response (suppression of bicep brachii muscle activity) irrespective of the task or timing of stimulation (even during periods of postural hold without preparation). These findings provide evidence that neural processes mediating the preparation and release of the focal motor task (release of the weight) are markedly attenuated or absent during imagined movement and that postural and focal components of the task are prepared independently.”