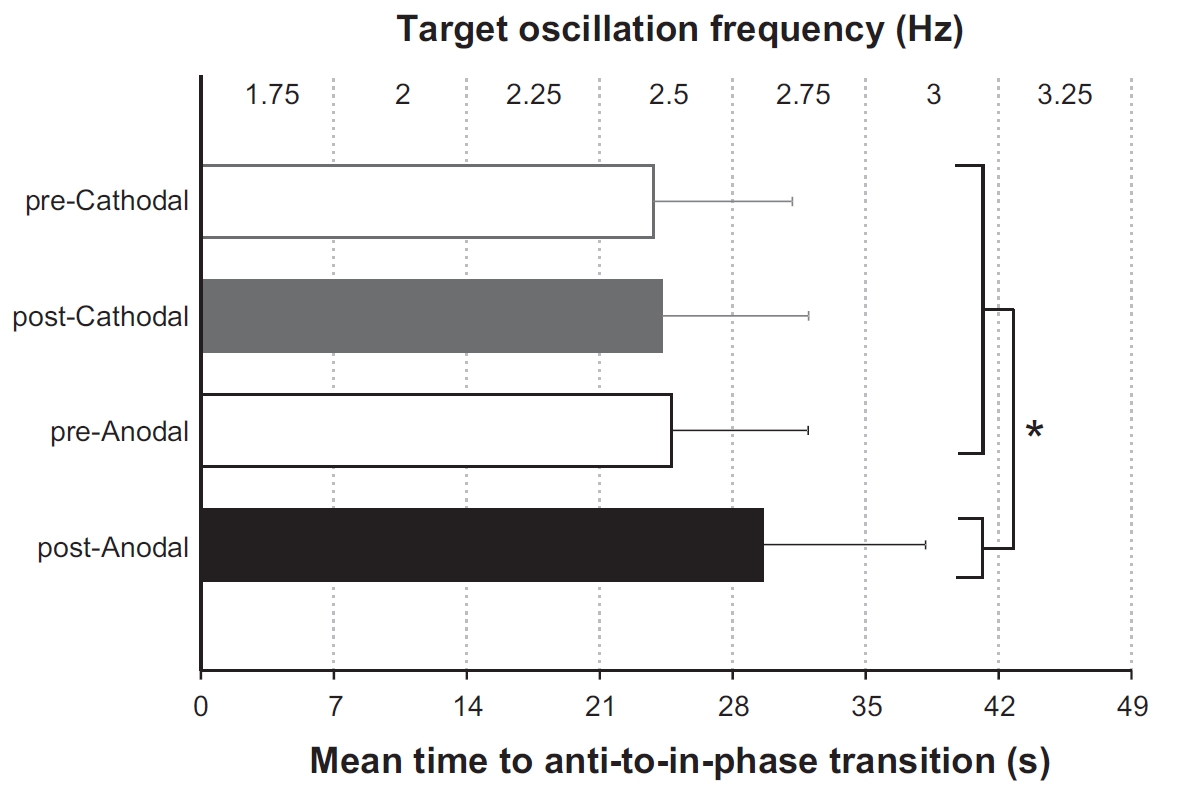 In this study subjects performed a bimanual coordination task, where spontaneous transitions between states is observed at higher oscillation frequencies. For example, when limbs are moved in a parallel fashion (like windshield wipers on a car) a transition is seen at faster speeds whereby subjects spontaneously change to performing mirror-symmetrical movements. We applied non-invasive direct current stimulation (tDCS) in a simple pre-post design to the supplementary motor area (SMA) to determine if changing the excitability of this brain area would affect these transitions. We showed that the more difficult pattern was able to be maintained for a longer period following anodal tDCS.

Coordinated bimanual oscillatory movements often involve one of two intrinsically stable phasing relationships characterized as in-phase (symmetrical) or anti-phase (asymmetrical). The in-phase mode is typically more stable than anti-phase and if movement frequency is increasing during anti-phase movements, a spontaneous transition to the in-phase pattern occurs. There is converging neurophysiological evidence that the SMA plays a critical role in the successful performance of these patterns, especially during anti-phase movements. We investigated whether modulating the excitability of the SMA via offline tDCS would delay the onset of anti-to-in-phase transitions. Participants completed two sessions (separated by ~48 hours), each consisting of a pre- and post-tDCS block in which they performed metronome-paced trials of rhythmic in- and anti-phase bimanual supination-pronation movements as target oscillation frequency was systematically increased. Anodal or cathodal tDCS was applied over the SMA between the pre- and post-tDCS blocks in each session. Following anodal tDCS, participants performed the anti-phase pattern with increased accuracy and stability and were able to maintain the coordination pattern at a higher oscillation frequency. Anti-phase performance was unchanged following cathodal tDCS and neither tDCS polarity affected the in-phase mode. Our findings suggest increased SMA excitability induced by anodal tDCS can improve anti-phase performance and adds to the accumulating evidence of the pivotal role of the SMA in interlimb coordination