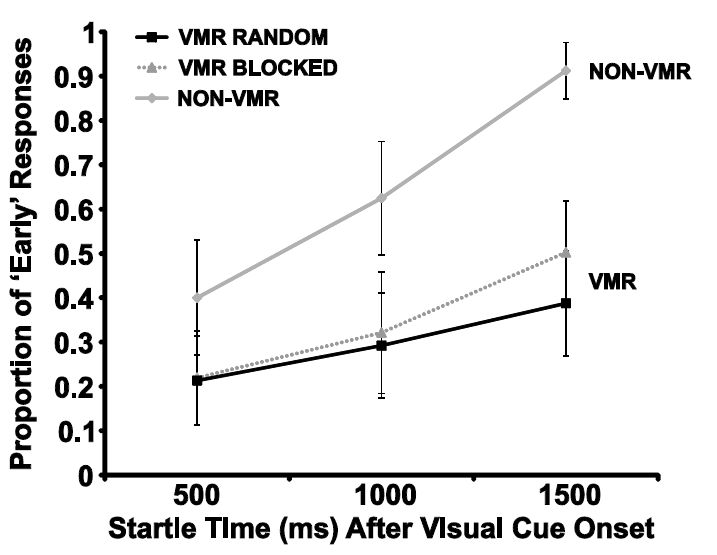 Seminal work by Georgopoulos and colleagues (1987) showed that reaction time (RT) increased when a rotational mental transformation had to be calculated prior to responding. A loud acoustic stimulus can be used to trigger prepared responses, so this effect was used in the current experiment to determine how preparatory activation levels in the brain were affected by the requirement to mentally rotate the target prior to responding. The results show that regardless of the amount of time given to prepare in advance, the likelihood of the startle triggering the response was low. This suggests that preparatory activity level when a mental rotation is required does not reach a similar level as when no mental transformation is needed. Full publication below.

Abstract:
“The present study investigated whether differences in reaction time (RT) between movements initiated to a visual cue (directly cued) versus movements initiated to a location other than the visual cue (indirectly cued) arise due to varying levels of inhibition within the motor system during response preparation. Unlike typical visuomotor mental rotation (VMR) experiments, this study employed a simple RT paradigm to allow response preparation to occur in advance of the imperative stimulus (IS). Participants responded to the IS by either moving directly to the location of a visual cue or to a location that required a mental transformation between the visual cue and the intended movement goal (i.e., a location 60°, 90°, or 120° rotated with respect to the visual cue). To probe motor-related activation during response preparation, a startling acoustic stimulus (SAS, 124 dB) was randomly presented 500 ms, 1000 ms, or 1500 ms following visual cue onset, but before the IS. Results showed similar RTs during non-startle control trials regardless of rotation angle and whether trials were completed in a random or blocked design. Interestingly, SAS trials showed a low incidence of early response triggering across all time points regardless of whether the movement was directly or indirectly cued. In contrast, directly cued movements performed outside of the VMR context showed a high incidence of SAS response triggering. These results suggest that when a stimulus to target-goal transformation might be required, inhibitory suppression of motor-related activation arises regardless of whether the final movement is directly or indirectly cued.”